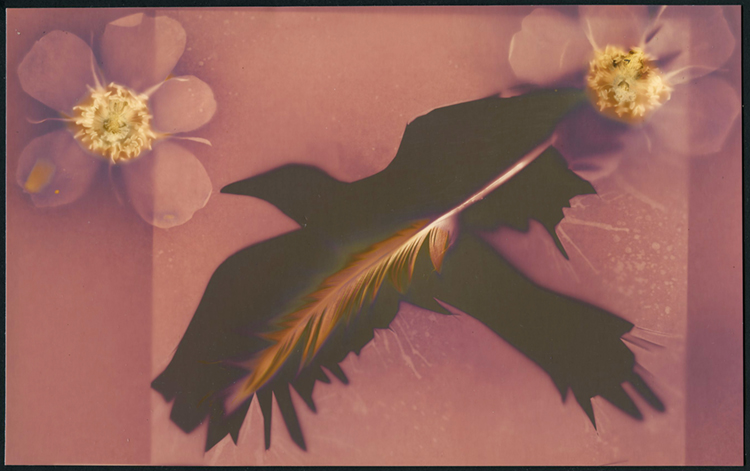 Paving the way for alternative process photography at UAF is Instructor J. Jason Lazarus. Aside from coordinating the Society for Photographic Education Northwest Chapter’s upcoming conference at UAF, Jason is an award-winning photographer whose work has been exhibited around the country (Check out our post Alternative Lens on Photography for more details about the conference). The two series below use alternative processes to compliment the stories they tell.

Emblem and Artifice: Withered Symbols of the War

1945. In a world ravaged by the Second World War, wounds ran deep. Seemingly permanent, the trauma inflicted and lessons learned from this global conflict were etched into the minds of the millions who suffered its effect. The horrors, the heroism, the defeats and victories were all carved into the collective psyche of a generation. Surrounded by reminders of this conflict, these brutal memories were similarly imprinted onto all manner of artifacts — from a fallen soldier’s uniform to the flag of an oppressive regime. Most potent of these were the symbols that had defined the conflict itself — those icons of fear and hope, oppression and resistance. These rival concepts often existed within the same symbol, even though history has often chosen to remember only one perspective. Coupled with the memories of a world on fire, these symbols were emblazoned with the regrets and hopes of all.

Looking back 70 years later, that turbulent and strong-willed generation has nearly passed on — and with them their painful memories. Those once-formidable symbols representing the collective regrets of a generation have begun to wither — and we foolishly begin to follow in footsteps best left forgotten. As much as history holds lessons for us to learn, its narrow perspective often defines regrets shallowly, failing to remember the depth of our mistakes. To appreciate a symbol of hope, we must first understand why people feared it — and to understand an insignia of hate, we must understand why it inspired. No reflection is complete without understanding its source — and so with each emblem, there exists an artifice.

About the process: Using Kodabromide Paper that expired August 1, 1945 — five days before the Hiroshima Bomb — the paper is coated with a resist and the design cut into the resist. Exposed to light, the paper is then alternated between developer and fixer (one print starts in the developer while the other starts in the fixer, and then alternated), allowing the chemistry to eat away the resist, exposing the paper to the chemistry. This action creates rust-like, decaying patterns of alternating exposed and undeveloped (yet “fixed’) areas. Once the entire resist is washed off, the print is fixed completely and washed.

Treasure and preserve the stories before they’re lost. Respect and honor these places for what they represent as part of our collective past as Alaskans.

Hidden within the thick boreal forests of Alaska lie the overgrown remnants of the abandoned mines, dredges and Gold Rush communities that define our rich and fabled mining past. These neglected relics may seem like empty husks of their former selves, idle for the last 60 years, but to the careful visitor, their walls vibrate, their machines hum and the air is alive with the latent life force of those that once called these places home. The stories of the Klondike Gold Rush are immortalized in the fictional tales of London and Service, yet the plight of the common man forging a home out of the unexplored tundra has been left untold. However, with each passing year, yet another miner’s story is lost to the pages of time, and with them, so do fade the stories that define these hallmarks of Alaska’s pioneer past. Without a connection to the past, these derelict buildings and discarded artifacts lose their importance even though they represent all that remains: a poor substitution for a once rich and storied life.

About the process: These prints combine both digital and film technologies to produce images using a 160 year old printing process, called Van Dyke Brown. Each print is handmade, has unique brushstrokes and is one of a kind. They range in size from 8Ã—10 to 11Ã—17.

Students enrolled in Jason’s Handmade Photographs class have the opportunity to explore a vast array of processes. Check out our gallery to see work from some of his recent classes.

Acrylic Gel Transfer: Several layers of gel medium are used to cover a laserjet or xerox print of an image. While the last layer of gel is still wet, the paper is laid face down on the receiving surface, such as wood or watercolor paper. Once it is dry, the back of the paper is removed by spraying with water and carefully rubbing the paper with your fingers; the ink is suspended in the gel on the new substrate. Areas that were white on the original print will now be transparent.

Anthotype: Organic material such as vegetables, flowers or teas are mashed and used to coat a piece of paper or other substrate. Once dry, items or digital negatives are placed on top and left out in the sun for an extended period of time, anywhere from days to months. Over time, the sun bleaches out the coating that is exposed to the sunlight. The areas that are covered by the items on top of the paper–or the darker areas of the digital negative–retain the color of the organic material. The process never gained popularity due to its fugitive nature.

Bromoil: A traditional darkroom silver gelatin print is processed like normal, save the fact that a non-hardening fixer is used to render the image light-safe. It then goes through a “bleaching and tanning’ process using a mix of chemicals (potassium bromide, potassium dichromate and copper sulfate) that hardens the gelatin in the print while simultaneously eliminating the metallic silver. At this point, the paper looks almost blank again except for a faint ghost of the original image. A stiff lithographic ink is applied to gradually create the final result. Each bromoil print is unique, has a painterly quality and opportunities for manipulation; however, it is a notoriously difficult process due to the high number of variables that can cause the print to fail, from the type of paper used to the temperature of water.

Chemigram: A relatively newer process, the chemigram was developed in 1956 by Pierre Cordier and is a kind of “camera-less photography.’ A piece of darkroom photographic paper is exposed to light and then coated with one or more substances called resists. These could include peanut butter, lotion, oil, gel–the sky’s the limit. The paper is then passed between standard darkroom developer and fixer. The chemicals eat away at the resist leaving behind various colors depending on the chemical it was in while the resist came off. In the developer, blacks begin to form. Conversely, whites remain if the paper was in the fixer. The use of certain resists on some papers can even result in other colors, such as blues or purples.

Cyanotype: One of the most popular forms of alternative photography, the cyanotype is often the first that is taught. Cyanotype solution consists of two parts–potassium ferricyanide and ferric ammonium citrate–that are mixed together in equal parts. Inexpensive kits can be easily found online. Paper is coated with the solution and, once dry, images can be created by arranging objects on top of the paper or with a digital negative. Exposure to light is relatively short and water is all that is required to produce the signature Prussian blue print. At this point, the artist might chose to tone the print by soaking them in different teas, coffee, wine tannins, etc, to alter the color. The process been popularized through its use in blueprints.

Etching: A design is lightly drawn into a ground (in this case, floor wax) that has been added to a copper plate. The plate is then submerged in acid which eats away at the inscribed design, creating grooves in the copper plate that hold the ink. When the plate is run through the press with a piece of damp paper, the ink in the grooves is transferred to the paper.

Large Format Paper Negative: Large format cameras use negatives that are 4×5’ or larger and were used primarily in the 19th and early 20th centuries. The large negatives meant that images could be created through contact printing (placing the negative directly on the paper and exposing it to light). Paper negatives are created when photographic paper, rather than film, are placed in the camera, allowing the image to be shot directly on the paper. Photo paper is less sensitive to light than film, meaning that these often require a longer exposure, resulting in a softer image.

Liquid Light: This is a liquid emulsion that can be applied to nearly any surface to make it photosensitive. It can be directly poured or brushed onto many surfaces though some, like metal, porcelain or clay, may require a preparation layer of polyurethane or gelatin. After liquid light is applied, it is processed like any normal darkroom print.

Lumen: Organic material is placed on expired black-and-white photographic paper and left in the sun for several hours. The moisture from the material reacts with the paper’s emulsion, creating different colors depending on the type and age of the paper used. No processing is required. Like anthotypes, these images are fugitive and will fade over time, unless they are fixed. However, fixing the prints often destroys the vibrant colors created.

Photo Intaglio: There are several types of photo intaglio processes. The images in our gallery used solarplates– thin, steel plates with a photosensitive layer on top. A digital negative is exposed on the solarplate. The plate is then developed in water, cured, then inked and transferred to paper.

Photogram: A camera-less photographic process where an image is created by laying objects on a piece of light-sensitive material and then exposing it to light.

Pinhole: A simple camera can be constructed out of any light-tight receptacle (such as a shoe box), using a tiny pinhole in lieu of a lens to let light in. Light-sensitive material or film is placed in the box on the opposite side of the pinhole to capture the image.

Polaroid Transfer: The image area of a fully developed Polaroid is cut out of the frame and placed in warm water. Using a small paintbrush, the thin, veil-like emulsion is coaxed off of the backing and onto a piece of paper (see this process in action in this video clip).

Polaroid Transparency: A fully developed Polaroid is disassembled and the front carefully peeled away from the back (which contains the developing chemicals). The darks in the image are retained on the clear front, the whites are now transparent.

Van Dyke Brown: A type of iron-silver printing that uses ferric ammonium citrate, tartaric acid, and silver nitrate. It uses contact printing and is praised for its high tonal range.

Xylene Transfer: This solvent (along with others like acetone) can be used to transfer Laserjet or photocopied images to other surfaces. The original image is placed face down on the receiving surface and xylene is poured on the back (or drawn with a blender pen). A spoon is used to burnish the paper, transferring the image to new surface.