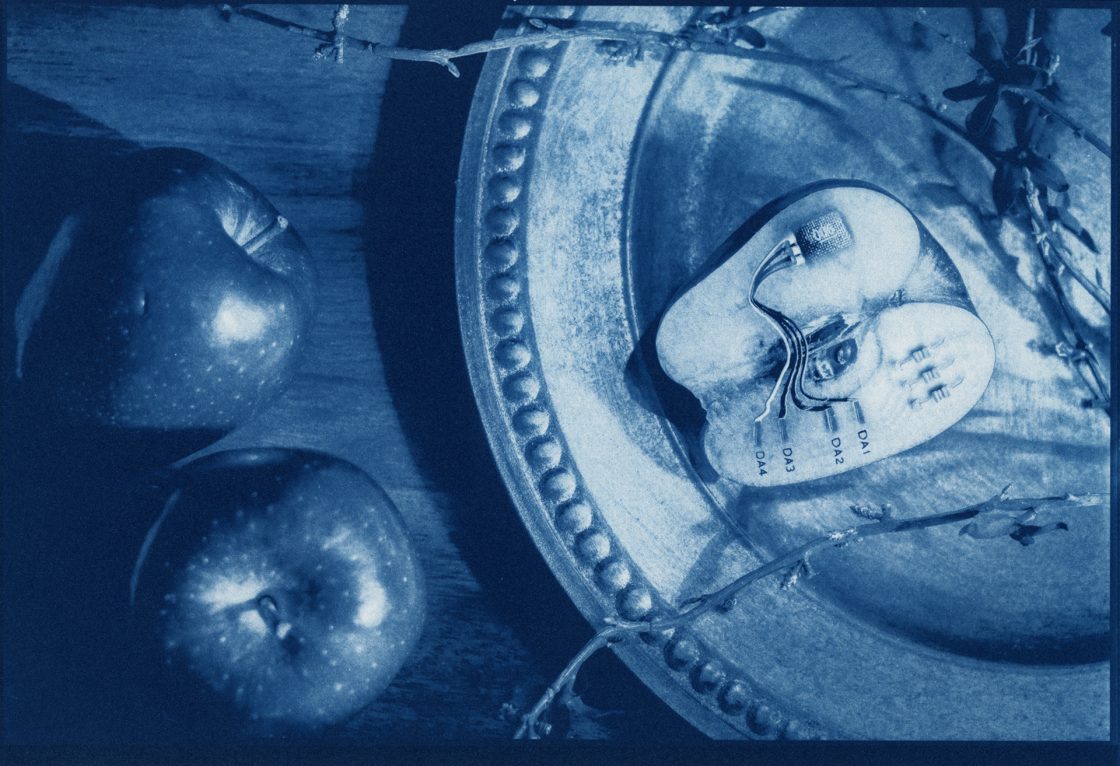 Walking down the first floor hallway in Bunnell I pass by a collection of images that don’t fit into our modern conception of what photographs should look like. One image in particular jumps out at me — an arrangement of apples next to a silver platter. On closer inspection I realize that on the platter is another apple, this one halved and covered with what look to be electrodes. As intriguing as this imagery is, the thing that makes the image really stand out on the wall is its vibrant blue color. The next time I meet Jason for coffee I ask him about this and the other ‘photographs’ that are displayed in Bunnell. These are works from Jason Lazarus’ Handmade Photos class, in which he teaches students photographic techniques that fall outside film or digital image-making. The blue image is a cyanotype, a procedure discovered in 1842 that uses ferric ammonium citrate and potassium ferricyanide to create a photosensitive solution that when exposed to UV light turns blue. Any area that does not received UV rays remains white. Typically cyanotypes were used as a copying technique and gave us the term ‘blueprint’ but it can also easily be adapted to fine art photography.

The artist of our example, BFA student Kathryn Reichert, tells me that she combined historic and modern processes to attain the final image. First she took the photograph of the apples and the platter, then she added the hardware to the halved apple with Photoshop, and finally she printed out the negative and contact printed it on a sheet of cyanotype solution-coated paper. This melding of the old and the new is also reflected in the title of the photograph, Still Life With Genetically Modified Apples. According to Kat, “combining the [historic] process with digital tools and “updating” the classical fruit still life to address our changing relationship with food (genetic modification)’ modernizes both the concept and the technology.

While Jason Lazarus is passionate about teaching students these so-called alternative processes, he is equally excited about the prospects of combining these with today’s digital technology to create images that would not have been possible in the 1800s.

In an age where more and more photographers have moved towards digital processing he feels strongly that students need to connect to the photograph as a tangible object.

So often we experience images through a computer or phone screen. Our sensory experience is limited to that of vision. In Jason’s classes students create photographic objects that demand to be explored through a variety of other senses. In particular, the tactility of these objects brings to mind the traditional conception of art as a precious and unique object. While this concept is now outdated in many ways there is something magical about an object that was crafted by human hands.

Jason’s commitment to student learning and success is not limited to just teaching alternative processes, he is also working to provide students with experiences and perspectives that go beyond the classroom. This fall Jason is bringing the Society for Photographic Education’s North West Chapter conference to UAF. The event will feature two full days of talks, round-table discussions, and workshops. Brian Adams, best known for his I Am Alaskan and I Am Inuit projects, will be the keynote speaker. This will be the first time that the conference has come to Alaska and Jason wants to highlight the uniqueness of our local environment by offering a two-track conference program. One track will be dedicated to Alaska-based proposals while the other will follow the model of previous conferences and bring in projects from across the globe. The Alaska-specific track is being developed in partnership with Alaska Native educators like Evon Peters, Sandra Kowalski, and Sean Topkok and will feature a traditional welcome ceremony to open the conference. One of the other reasons Jason insisted on the two-track model is because it will allow UAF students to have a better chance at having a proposal accepted. Student engagement is key to the success of this conference but Jason wants to emphasize that it is not just photography students who are being encouraged to submit proposals. Anyone with an interest in photography is welcome to apply.

Jason understands that Alaska can be very isolated and that students here do not have many opportunities to be exposed to the international photography scene. When he was working on his MFA at the Academy of Art University in San Francisco he found himself part of a vibrant arts community in the Northwest.

One of his ambitions in bringing the SPE conference to UAF was to give students here a taste of that community and encourage them to make connections with educators, scholars, and artists outside of Alaska.

Instead of taking a select number of students to a conference, Jason is bringing the conference to the students.

Interested in seeing some of the alternative photographic processes out there? Stop by our photo gallery!